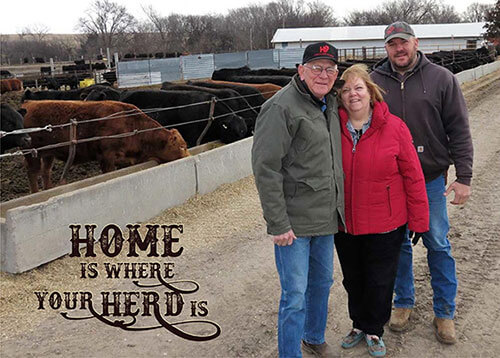 Hunt Limousin Ranch is a family owned and operated seed-stock business.  Charlie and Nancy began the operation soon after marrying in 1960 with a modest herd of 350 black-baldy females.  Charlie started using Limousin bulls in 1978 with no intention of ever being in the seedstock business, but as more and more neighbors took notice of the good Limousin sired calves, Charlie started selling a few bulls. The demand for HUNT genetics grew and today Hunt Limousin Ranch ranks as one of the largest and most well respected Limousin seedstock operations in the nation.  We were humbled to be awarded the Beef Improvement Federations prestigious “Seedstock Producer of the Year Award” in June of 2017.

Although the cattle have changed over the years, family, faith and honesty still drive every decision made.  We believe in treating others as we'd like to be treated, taking care of the land for future generations, and marketing a high quality product at a fair price.

The core of our program revolves around raising sound, functional, efficient cattle that are designed to work in the commercial industry.  For nearly 40 years Hunt Limousin Ranch has been breeding Limousin & LimFlex cattle near Oxford, Nebraska.

Charlie and Nancy still live on the ranch and have an active role in the business.  They are honored to have passed the reins to their youngest son Daniel, along with his wife Melinda and their children Jenna, Adeline and Houston.

Keeping these three foundations at the core of every breeding decision, along with multiple other traits, we strive to create a balanced, functional, real world beef animal.  Our bulls and females flat-out work, and they'll work in any environment across the country.  Across multiple traits, our cattle rank in the top percentiles of the Limousin breed.  We are known for producing extremely docile cattle with built-in calving ease, efficient growth, and which will give a positive impact to the beef industry.

Our seed-stock cattle are not babied, they must perform.  We do not creep feed, this way we know which females are doing their job.

Being a member of the Limousin Inventory Management System (LIMS), all data is turned in, on every animal.  With large contemporary groups, our truthful data is a solid measure and reflection of our herd.

We strive to conserve the land for future generations,
stay current and knowledgeable on leading cattle issues,
produce high quality cattle and market them at a fair price,
and always treat people with honesty and integrity.

Relax and select the best bulls to complement your herd in a low pressure atmosphere. Take all the time you need to study through the bulls. You will enjoy our unique process of showing you our bulls. We’ll bring you 4 or 5 at a time, hold back the ones you like, eliminate the ones that don’t fit. Through this process of elimination, you’ll end up with the bulls that give you the best match for your specific scenario.

HUNT Limousin customers make more cash on their calves sired by HUNT bulls! When your calves are ready to be marketed they will be happy to bid either right off the farm or through the sale barn. Premiums are paid when your entire calf crop is influenced by HUNT genetics.

All performance data and ultrasound measurements are available. All bulls have Genomically Enhanced EPDS, parentage tested, homozygous black & polled tested, and are tested BVD negative. Udder scores and information on the dams are also available.

Come to the ranch at your convenience, pick out your bulls, and Hunt Limousin Ranch will provide free feed and board until the bulls pass a Breeding Soundness Exam and are delivered. Free delivery within 250 miles of Oxford, Nebraska.